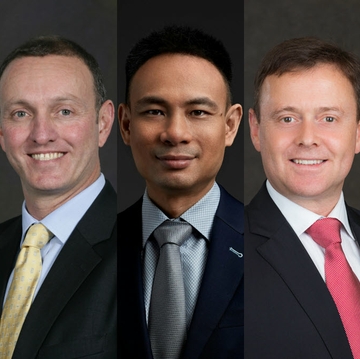 FM Global has announced several senior executive appointments as it promotes seasoned leaders within the company to new roles.

Thompson joined FM Global in 1993 as a risk consultant engineer in the company’s Melbourne office, and has since served in various engineering and leadership roles in client service, sales, and underwriting within the U.S., U.K., and Australia. Prior to that, Thompson was an environmental project engineer for a Mobil/Exxon joint venture.

Thompson, who holds a bachelor’s degree in chemical engineering and a master’s degree in environmental engineering, both from the University of Melbourne, succeeds Ziad Alex S. Tadmoury, who has been appointed senior vice president, AFM division manager, FM Global’s middle market business unit.

Tan joined FM Global in 2004 as a risk consultant engineer. Since then, he has served in a variety of roles, including account engineer, account manager, and client service manager with a primary focus on Singapore, Malaysia, Thailand, Hong Kong, and South Korea.

Prior to joining FM Global, Tan worked as a process engineer for ABB Lummus Global in Singapore, Bloomfield, New Jersey, USA, and The Hague in the Netherlands. He holds a bachelor’s degree in chemical engineering from the National University of Singapore.

Both Tan and Stafford will report to Thompson.

About FM Global
Established nearly two centuries ago, and present in the Asia Pacific region for 50 years, FM Global is a mutual insurance company whose capital, scientific research capability and engineering expertise are solely dedicated to property risk management and the resilience of its client-owners. These owners, who share the belief that the majority of property loss is preventable, represent many of the world’s largest organizations, including one of every three Fortune 500 companies. They work with FM Global to better understand the hazards that can impact their business continuity in order to make cost-effective risk management decisions, combining property loss prevention with insurance protection.